I have another beauty review in the works, so I thought I should write a current skin care update with my baseline favorite products right now. Of course, my skin had gone through some serious changes over the last two years, with my pregnancy and postpartum, and I’ve also made some choices in my personal consumption habits that have affected my skin care. The last time I wrote about my regular skin care routine, it was in the context of how I’ve had to change my habits as I balance parenting responsibilities and self-care. Before that, I wrote about my pregnancy skin care over a year ago.

Of course, nothing is constant in parenting, and I eventually had to change up my routine again because Elliot’s sleeping patterns changed. I could no longer count on any longer chunks of sleep at night, so I decided that getting to bed as soon as I could was more important than facial massage. I still have roughly the same routine of cleanse, hydrate, and nourish, but I’ve discovered some new favorite products. 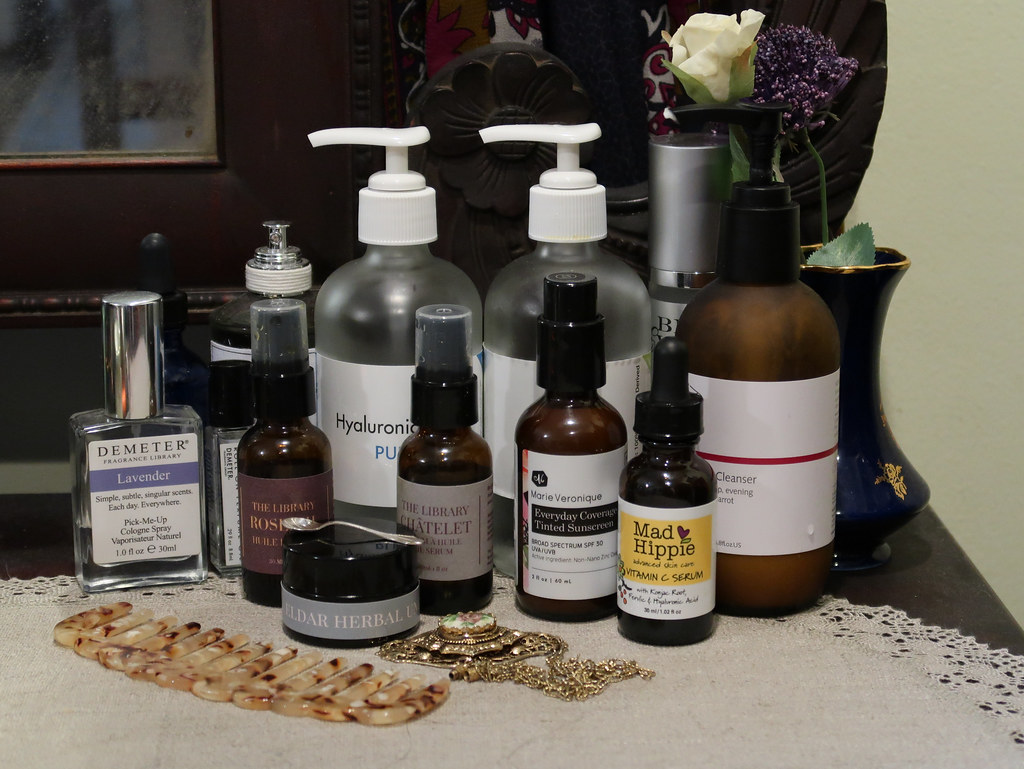 Last time I wrote, I had discovered the Voltaire and Chatelet oils from The Library Apothecary. Well, since then, I’ve fully become a Library girl (it’s like a Glossier girl, but with less pink and more amber glass). I’ve started using Mara’s Rose Oil at night after cleansing and hydrating, and following it with her Elder Balm, which is a wonderfully fragrant experience that also happens to both nourish and calm my skin. I even add a little dab in the mornings under my mineral sunscreen to prevent it from becoming too matte. If she came out with a cleanser and a hydrating serum, pretty much all of my routine would come from her, minus actives and sunscreen. And I promise this isn’t sponsored — The Library Apothecary is a one-person operation and I’m pretty sure she doesn’t exactly have an advertising budget.

The other major development is that I am no longer using Glossier Milky Jelly. In my efforts to create a more sustainable skin care routine, I decided to try the Trilogy Cream Cleanser, as it is packaged in a glass pump bottle, rather than plastic. It has a skin-friendly pH and doesn’t foam, and I’ve found it a reasonable swap for my skin. It is scented with essential oils, but I find the aroma strangely appealing now that I’ve been using it for a while, and it doesn’t irritate my eyes, which is why I had previous had to stop using every other cleanser I tried besides the Glossier. Do I wish it were unscented? Yes. Am I willing to try the unscented version that uses an oil that my skin has disliked in the past and is more expensive and hasn’t been explicitly pH tested by a blogger I trust? No.

I’ve also switched to a very bare-bones hydrating serum from Timeless Skin Care, as well as using their pure squalane oil for my first cleanse (I’m using it up after buying a giant pump bottle for Elliot’s cradle cap, which went away after one treatment). I apply three pumps of squalane to dry skin and massage to break up sunscreen and lipstick. Then I remove it with a flannel soaked in warm water and follow with the Trilogy cleanser. Three times a week, I use my Bell-Evolve Lac-Luronic serum (I’ve also been using it as a deodorant — thanks, Tracy!), and then apply hyaluronic acid and Rose Oil, followed with a pea-sized amount of the Elder Balm. I use a tiny silver vintage spoon that my mother gave me as part of a set to use with my vintage Brambly Hedge teaset, but since Elliot is still a few years away from enjoying tea time with the good china, I don’t think he’ll mind if I borrow this little choking hazard to scoop my fancy skin balm. I’ve been told that it’s a “dupe” for the May Lindstrom Blue Cocoon, despite clearly being superior because it’s purple and also doesn’t contain the one ingredient that always causes me to break out.

In the morning, I cleanse with a half a pump of the Trilogy cleanser, and then apply some vitamin C serum. I’m currently using Mad Hippie‘s because I can buy it locally. After that, I hydrate and apply one pump of Chatelet oil, followed with a lentil-sized amount of Elder Balm if it’s a dry day. Then I apply my sunscreen, which is currently the Marie Veronique Everyday Coverage in Extra Light Tint, which isn’t my favorite, but it ticks the boxes I need for now, but it’s oddly gritty, so I’m still looking. Unfortunately, every time I try to return to an organic sun filter, my skin freaks out, so I’m sticking with inorganic right now. I have a new one on the way, though.

I’ve actually stopped wearing pretty much any other makeup other than tinted sunscreen and lipstick, unless I’m doing photos or a video, so my routine is quite minimal indeed. And my biggest sustainability habit has been to stop buying sheet masks. I still have a few left in my mask drawer, but for the most part, the only mask I do is a weekly clay mask that I mix myself from bulk purchased green clay mixed with matcha. And my regular daily routines seem to provide enough hydration so that I don’t need anything else.

So it is from this baseline that I will be testing some new products. Right now my skin is the calmest and clearest it’s been in my adult memory, so I’m hesitant to shake things up, but I do have a few review products that I’ve been sent, so stay tuned for that.

NB: All products were purchased with my own money and I was not given any incentive to feature them here. All thoughts are my own. None of the links are affiliate.