NB: The short answer to the question “Where’ve you been the last month?” is that I’ve been dealing with a miscarriage. So fair warning — that is what I’m going to talk about. I’ll try not to be too graphic, but if you’re not up to hearing about pregnancy, miscarriage, and general health/mental health ickiness, you’ll probably want to just enjoy this adorable picture of my cat and not read any further: 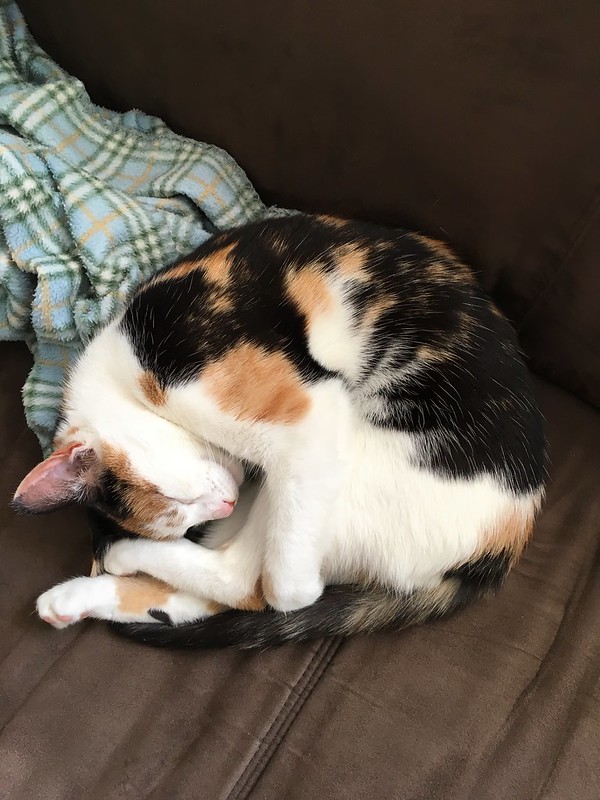 So, hi. It’s been a while since I’ve had a regular posting schedule over here. I got going on my new segment and then stopped updating that, too. I haven’t even been able to put out a beauty or tea review in a while. And the reason for that is that I was pregnant and feeling crappy. And then, well, I wasn’t pregnant anymore, and feeling even crappier.

Miscarriage isn’t really something people talk about in normal, everyday life. Since I found out about my pregnancy and even more after my miscarriage, I’ve found this amazing group of women who have come to me and shared their experiences and that, yes, they know what I’m going through, and that, no, I’m not alone. So if you’re currently going through a miscarriage, you’re really, really not alone. So many people have been there and come out the other side. I’m not sure I’m entirely the best example because, even though I feel like I’m on the upswing, I haven’t even started trying to get pregnant again yet.

Alright, let’s back up to September. Mr. Tweed and I had been trying for a few months, and I was pretty sure this month would be more of the same. Until I got up early, peed on a little white stick, and there it was. Another line. I said something entirely unladylike and called the husband into the bathroom. We were thrilled. I called the doctor and made my appointment for when I would be eight weeks along, and then settled in for an excruciating four week wait. I started feeling occasional nausea around week six, and for some reason I completely lost my taste for tea and developed a wicked craving for coffee. My skin also freaked out and became very dry and sensitive.

Then, we got to the doctor and I got up on the table for the ultrasound tech and she put the transducer on my stomach. We watched as the monitor in front of us started showing images. And then we saw the sac inside my uterus… and not much else. The ultrasound tech made a somewhat disappointed comment, but said we should wait to see what the doctor said. But I knew what it meant. We sat in the waiting room for an excruciating half hour until the doctor was ready to see us. She confirmed the bad news: It didn’t look like much, if anything, was growing in my uterus. We decided to wait a week and come back to double-check. I cried a fair amount that week. After a week, it was more of the same. I got a packet of misoprostol and a prescription for strong pain meds, and went home to miscarry my pregnancy.

My experience with misoprostol was… anti-climactic. I had some cramping and some bleeding and some upset stomach, but nothing even as bad as my period usually is. I was confused and thought about calling the doctor, but opted to wait a couple of weeks. I mean, all my hormonal symptoms had gone away, and I had passed something. I spotted for the entire two weeks. Then, the night before it would be two weeks since taking the pills, I was having some weird cramping, so I put on a pad, just to be safe. Well, it was a good thing because at about 4 a.m., I was hit with a terrible wave of cramping and got up just in time to go to the bathroom before the flow hit. I called the emergency line for my doctor, where I was told to call back if things got worse. Things got worse. They squeezed me in for a same-day ultrasound and exam and the doctor discovered that I had not fully passed the pregnancy and scheduled me for a D&C the next day.

The D&C was almost worse in the hours leading up to it than the actual procedure. I’d never been under anaesthesia before, so I was nervous. But everyone at the surgery center was fantastic and I had no problem going under, or waking back up. I kind of wanted to go back to sleep after they woke me up, but Mr. Tweed was in the recovery room and got me up and talking while the nurse brought me water and ginger ale. After the anaesthesia wore off the next day, I got a bit more sore, but I never had to take any of the prescription pain pills. I was back at work the next Monday (although I had some pain the afternoon and opted to telework the next day), and I made it through Thanksgiving. I had some spotting for the next two weeks, to varying degrees, but almost exactly two weeks after the surgery, the spotting stopped. I had my post-op appointment and the doctor said everything looked fine. Four weeks and a day after my surgery, I got my period again.

And, well, that’s where I am now. At least, that’s what happened. You might notice that I haven’t talked a lot about how I feel about this whole thing. I mean, the short answer is “not great,” but miscarriage is so much more nuanced than that. I’ve been grieving, angry, sad, kind of secretly glad I got to have something to drink at Thanksgiving and Christmas, worried for the future, and absolutely terrified of trying to get pregnant again in case this happens again. It’s a bit of a mixed bag.

And, yeah, it hasn’t helped that the whole process has stretched out for longer than a month. I pretty much didn’t go into the office for about half of November. I’m just now starting to feel like life is getting back to normal. But I haven’t really been up to doing most things that aren’t absolutely necessary. I did get all my gift shopping done, but I’m not really feeling in the holiday spirit. I never put out my Christmas tree (all decorated, but still wrapped up in our storage room). It’s just… really not how I thought this holiday would be this year.

But I’m climbing out, slowly but surely. Exercise has helped a lot, as has giving myself permission to skip things that I don’t feel up to doing. I’ve watched a lot of Netflix when I’m not either exercising or at work. But I read a book earlier this week, which was nice. And I’ve been reading some stories for a new “Tea and a Story” segment, hopefully later this month. And Mr. Tweed and I have gone to a couple new restaurants for our food blog. Like I said, it’s a slow and steady return to normalcy.

I wish I could finish this up with some sort of advice, either for people who are going through this, or people who want to support people who are going through this. But I guess the only thing that I can say is: Be patient. With yourself. With your friend who is grieving. It’s kind of lame advice, but really, every person is different. Some people want to talk about it; others don’t. Some people want to have a ritual or some sort of keepsake. Others really, really don’t. It’s not about specific acts of sympathy or acts of self-care — it’s about listening to yourself and your own needs, or listening to your friend and what they want. I guess that’s really all I can offer.

So that’s really where I am. Hopefully, my regular posting schedule will start back up soon, but it might be a little different. I haven’t been tasting many new teas or trying new beauty products. But I still have life thoughts to share from my quiet little corner of the sofa.

8 thoughts on “Where I’ve Been Lately (TW: Miscarriage)”